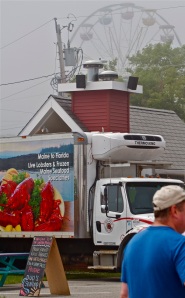 This is not the first year that People for the Ethical Treatment of Animals (PETA) planned to protest the Maine Lobster Festival in Rockland, Maine, but the activist organization hoped to create a buzz this year with protest flyovers of a small plane trailing a banner reading “Keep Your Paws off Their Claws! Try Vegan.” As the first scheduled flyover time came and went though, the smoke and steam coming from myriad food trucks and the large lobster cooker station at the Festival mingled with the sinewy tendrils of a Midcoast fog bank. Harry Nikitas of the Aerial Banner Company, the company contracted to execute the flyovers on behalf of PETA, confirmed the protest flyovers were grounded due to fog.

Festivalgoers in for “A Surprise” Courtesy of PETA

“When attendees arrive for the first day of the Maine Lobster Festival on Wednesday,” a PETA release circulated yesterday explained, “they’ll be in for a surprise, courtesy of PETA.” According to the release, PETA is attempting to “remind festivalgoers that lobsters feel pain and fear yet are killed in gruesome ways to be turned into ‘seafood.’ ” While many of the festival organizers, volunteers and those working the various booths were aware of the planned protest as the Festival was getting ready to open today, nobody interviewed for this story said they had any concerns about the way Maine lobster are sourced, processed or cooked. “We steam fresh local [lobster] that carries the seal of sustainability from the [Marine Stewardship Council],” a Lobster Festival spokesperson told me. “We get them from Linda Bean Lobster Co.”

The flyover protest comes on the heals of Fred Schneider’s 23 July Portland Press Herald op-ed titled “Spare the suffering and skip the annual Maine Lobster Festival”.
Schneider is the lead singer of the band the B-52s. “In the ’70s,” wrote Schneider in his op-ed, “the idea for the B-52s’ breakthrough hit ‘Rock Lobster’ was sparked by a slide show at an Atlanta disco that showed puppies playing, children playing and then lobsters on a grill. I was infuriated!”

At the heart of Schneider’s infuriation is the controversial assertion that lobsters and other crustaceans “feel pain.” While the jury remains out on whether or not crustaceans feel pain (there are scientific studies supporting both sides), Schneider says he is “appalled when I see crustaceans being cooked alive.” He continues:

Crustaceans are unfamiliar to us – I get it. With their exoskeletons, jointed legs and long antennae, they certainly aren’t cuddly like dogs and cats are. Despite such differences, though, there’s something big that they have in common with us: the capacity to suffer. The idea of subjecting a fellow animal to a painful death for food has always haunted me, especially now, in light of the mounting evidence of their suffering.

The notion that lobsters feel pain and “yet 20 million of these sensitive animals, who carry their young for 9 months, take long-distance trips and hold claws with their young, are still slaughtered for our plates every year in the U.S.” haunts Schneider. Such was the context for his decision to use the 35th anniversary of the band’s hit song to team up with PETA on a video aimed at exposing “the callous abuse at crustacean slaughterhouses, where lobsters and crabs are routinely dismembered while they’re still conscious.”

The video, narrated by Schneider, sets out to explain why the pop star believes lobsters and other crustaceans are “Sea Life not Seafood.” The video features footage from what PETA calls “a shocking undercover investigation” that was first publicized by CBS News last September. The video purports to show a “primitive and painful” method used to process lobsters and crabs at the Linda Bean’s Perfect Maine processing plant in Rockland, Maine. PETA contends the video shows actions that violate Maine’s cruelty-to-animals statute. Knox County District Attorney Geoffrey Rushlau declined to charge Linda Bean’s Perfect Maine Lobster with animal cruelty.

“A Full-Scale Attack on the Lobster Industry”

Earlier this month, Bean responded to PETA’s accusations in an article in the Bangor Daily News. Bean’s response followed PETA taking credit for Delaware North Companies announcement they would no longer source their lobster for major professional sports stadiums from Linda Bean Perfect Maine Lobster. Despite PETA’s claim, a Delaware North Companies spokesperson declined to acknowledge the video or PETA as a motivating factor.

“What we have been witnessing for months is a truly radicalized organization, PETA, launching a campaign in Maine,” Bean told the Bangor Daily News. “Many here in Maine are seeing it as a full-scale attack on the lobster industry.” She went on to say:

In no uncertain terms, we will defend Maine’s lobster industry and the many communities and businesses that it sustains. My staff, plant workers, fishermen and I, as well others up and down our coast who are proud to play a role in this important industry, will continue to work toward further expansion of our industry’s vitality, both in Maine and across the country.

PETA maintains it is not focused on the whole lobster industry as Bean claims. David Byer, senior corporate liaison for PETA, was quoted recently in the Portland Press Herald saying that PETA is “focused on Linda Bean because she’s using these extremely cruel, worst practices when more humane practices are available.” He went on to say, “We’re focused on a very specific practice that can be remedied here.”

Many within the Maine lobster industry, however, believe that PETA’s efforts would not stop even if Linda Bean switched over to a processing method such as Hydrostatic Pressure Processing, which PETA says makes the processing of lobsters more humane.

“No Problem with the Flyover”

While the flyover protest scheduled for today is viewed by some as the latest action in an ongoing campaign to put the Maine lobster industry out of business, Maine Lobster Festival organizers didn’t put it in that context. “We have no problem with the proposed flyover and certainly respect those who choose to be vegan,” Chuck Kruger, president of the Maine Lobster Festival, told me today. “We offer plenty of other food choices at the Festival, and we also appreciate and support those people from near and far who love Maine’s favorite seafood and want to enjoy it with fellow lobster lovers on the beautiful Rockland waterfront.”

By contrast, Schneider suggested a “decadent vegan lobster bisque” or a “crunchy vegan crab rangoon,” two options I did not see at the Festival today. 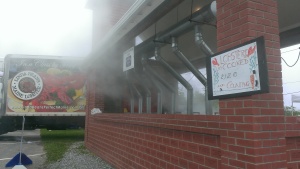 As of 4 p.m., the “drop dead” time for Harry Nikitas to pull the plug on today’s flight plan, the lobster cooker at the Maine Lobster Festival had cooked over 2000 pounds of lobster under the cover of an unforecasted fog blanket that just refused to give up the ghost. Nikitas, who spent the day grounded at an airport 10 miles north of Rockland, says he’ll fly tomorrow for no additional cost, but it’s unclear at this time whether or not he’ll get the go-ahead from PETA. If he flies, I’ll be sure to cover it (and the reaction to it) here at the Good Catch Blog…stay tuned.

Ret Talbot is a freelance writer who covers fisheries at the intersection of science and sustainability. His work has appeared in publications such as National Geographic, Mongabay, Discover Magazine, Ocean Geographic and Coral Magazine. He lives on the coast of Maine with his wife, scientific illustrator Karen Talbot.
View all posts by Ret Talbot →
This entry was posted in Lobster Fishery, Maine Fisheries, Northeast Fisheries and tagged Fred Schneider, Linda Bean Lobster, Maine Lobster Festival, People for the Ethical Treatment of Animals, Peta Lobster Protest, Sea Life not Seafood. Bookmark the permalink.