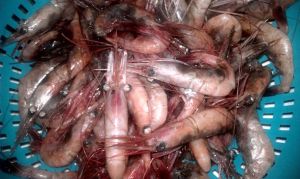 The Atlantic States Marine Fisheries Commission (ASMFC) has for the second year in a row issued a moratorium on the commercial northern shrimp (Pandalus borealis) fishery. The decision was made Wednesday in Portland, and it’s one that will no doubt hurt fishers in Maine’s small but valuable northern shrimp (commonly called Maine shrimp) fishery. Maine fishers were making over $1.75 per pound for northern shrimp in 2013.

“The bleak status report and continuing unfavorable environmental conditions convinced the Section to maintain a moratorium in 2015 to protect the remaining spawning biomass and allow as much reproduction to take place as possible,” stated Northern Shrimp Section Chair Mike Armstrong of Massachusetts. “The Section will work with its industry and technical advisors to ensure the highest quality data is collected through the research set aside quota.”

Northern shrimp are a cold water shrimp prized for their sweet taste. Found only in the Northern Hemisphere, U.S. northern shrimp fisheries have traditionally existed in Massachusetts, New Hampshire and Maine, with Maine being the largest. The shrimp spawn offshore in the late summer and the egg-laden females move inshore toward the end of the fall and into the winter months for their eggs to hatch.

A Boom and Bust Cycle 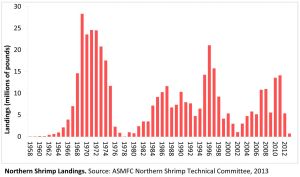 Opening again in 1979, the fishery began to expand but without the meteoric rise observed throughout the 1960s. In 1987, more than 11 million pounds were landed (7,791,485 in Maine). The Maine fishery was valued at $8,887,484 in 1987, with northern shrimp fishers earning more than a dollar per pound for the first time. The next decade saw fluctuations in the fishery until, in 1996, over 20 million pounds were landed, almost 18 of which were landed in Maine. In that year, the value of the Maine northern shrimp fishery hit an all time high at $12,924,557. The following year began a steady decline to the point where only 992,250 pounds were landed in New England in 2002 (845,984 pounds in Maine for a value of less than one million dollars.

In 2010 and 2011, the northern shrimp season was closed early due to the industry exceeding the recommended landings. In 2012, the fishery was further restricted, and in 2013, northern shrimp fishers failed to reach their quotas, landing only 676,935 pounds of the 1.39 million pound limit. The 2013 Assessment Report for Gulf of Maine Northern Shrimp found that the northern shrimp stock was overfished and overfishing was occurring. The 2014 was cancelled.

“Northern shrimp abundance in the western Gulf of Maine has declined steadily since 2006,” concluded the ASMFC. “Current biomass (1.1 million pounds) is the lowest value in recent history, estimated at 5.2% for the biomass reference period (1985-1994), and well below the biomass threshold of 19.85 million pounds and the biomass limit of 13.23 million pounds. Additionally, there has been recruitment failure for the past three years. The Northern Shrimp Technical Committee considers the stock to have collapsed with little prospect of recovery in the near future.” 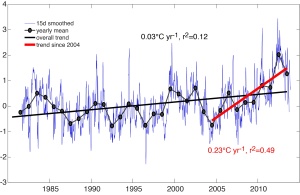 While industry consistently exceeded the recommended landing caps in the years leading up to the most recent collapse of the northern shrimp fishery, overfishing is not thought to be the primary cause of the collapse. Ocean warming and attendant declines in the shrimp’s essential food sources and increases in predators are thought to be the leading causes of poor recruitment. Researchers at the Gulf of Maine Research Institute have found the Gulf of Maine is warming faster than 99 percent of the world’s oceans.

Many New England fishers are frustrated because they feel they have worked with fisheries managers to rebuild stocks for several important species, and yet they have consistently had quota taken away. Many worry that as the Gulf of Maine continue to warm, few actions taken by fisheries managers will be effective at saving traditional fisheries. While there is disappointment and even some anger over the closure of the northern shrimp fishery for the second year in a row, many in the fishing industry acknowledge the necessity of the closure, even if fishing is not the direct cause of collapse.

Because the shrimp do not ship well, affordable northern shrimp (not unlike Maine soft shell lobster) are only available when they are landed locally.

In addition to announcing the moratorium for the 2015 commercial northern shrimp fishery, ASMFC also announced a draft amendment that would establish a limited entry program for the northern shrimp fishery for use in the future if and when the stock recovers and the fishery is re-opened. “A limited entry program will consider the appropriate number of participants in the fishery given biological, environmental, and economic considerations,” ASMFC wrote in a statement Wednesday. “The Draft
Amendment will also consider state-by-state allocations and revisit the fishery specifications process.”

Ret Talbot is a freelance writer who covers fisheries at the intersection of science and sustainability. His work has appeared in publications such as National Geographic, Mongabay, Discover Magazine, Ocean Geographic and Coral Magazine. He lives on the coast of Maine with his wife, scientific illustrator Karen Talbot.
View all posts by Ret Talbot →
This entry was posted in Global Climate Change, Gulf of Maine Research Institute (GMRI), Maine Fisheries, Northeast Fisheries, Overfishing and tagged ASFMC, Maine shrimp, Northern Shrimp, ocean warming. Bookmark the permalink.