Why don’t they just close the Gulf of Maine down and subsidize us like they do the wind farmers and the solar energy companies and farmers out west? They pay them not to farm, why don’t they pay us not to fish? 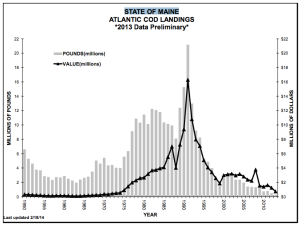 The headlines over the past week have once again been doom-and-gloom for New England’s most iconic fishery and, by extension, for fishing communities throughout the region. “New England coastal communities threatened by feds’ ban on cod fishing,” “Future for fishermen bleak under cod ban” and “New cod fish restrictions will hit Maine fishermen” are just a few of the headlines following the National Oceanic and Atmospheric Administration‘s (NOAA) National Marine Fisheries Service (NMFS) announcement that nearly the entire Gulf of Maine cod fishery is being shut down for at least the next six months.

While unprecedented, the news is not unexpected. Federal fisheries managers announced in August that surveys revealed a worsening crisis insofar as cod are concerned. According to a 1 August written statement, “The results indicate virtually every indicator of stock condition declined or worsened in 2013.” The most current stock assessment estimates show spawning biomass levels are at three to four percent of the biomass target for maximum sustainable yield. These levels call into question the Gulf of Maine’s cod population’s ability to sustain itself. In 2011, cod abundance estimates were 12-18 percent of a sustainable level.

“We realize that this news is difficult and NOAA Fisheries will work with our partners in the New England Fishery Management Council to discuss next steps, including peer review options of these preliminary results,” said fisheries managers in August.

While the August news may have been difficult, the recent announcement of emergency measures that would essentially close the Gulf of Maine cod fishery for the next months was devastating to fishing communities already reeling from last years quota cuts. The areas of the fishery that will remain open are severely restricted, causing many fishers to state it’s not even worth fueling their boats to go out fishing.

In addition to the outright closures , the so-called “seasonal interim closure areas” are now also closed to vessels using certain commercial and recreational gear capable of catching cod even if cod are not being targeted. In the open ares, fisheries managers have imposed a 200-pound commercial trip limit, and vessels that catch more than 200 pounds of cod must discard any overage at sea. Per the emergency management measures, no recreational possession of cod will be allowed.

“We’re trying to absolutely shut down fishing where there are concentrations of cod, so there will be zero cod caught,” NOAA Greater Atlantic Regional Administrator John Bullard, told the Boston Globe. “Anything that can catch cod is not allowed in these areas.” NMFS has targeted the emergency measures to restrict commercial and recreational fishing in spawning areas and in areas with the highest concentrations of cod catch based in recent fishing effort. The emergency measures are intended to protect the Gulf of Maine cod stock, a stock which Bullard says is “in free fall.” Given how severe the situation is, fisheries managers have not ruled out making the emergency measures permanent come next spring.

Based on where the closures are located, Massachusetts fishers will feel the brunt of the emergency measures. While Maine’s dwindling groundfishing fleet may have better access to open areas, they will be limited to the 200-pound trip limit–a limit federal fisheries managers told fishers in a 10 November bulletin they hoped they wouldn’t land. “The GOM cod stock is in poor condition,” the Greater Atlantic Region Bulletin stated. “For this reason, we strongly encourage fishermen to avoid catching cod to minimize fishing mortality and to avoid the need to discard catch beyond the 200-lb trip limit.” Fisheries managers explain the trip limit is really in place to allow for cod bycatch while targeting other species.

The Gloucester Times, out of Gloucester, Massachusetts, called the emergency measures “staggeringly restrictive,” especially for the larger Massachusetts groundfish fleet. Massachusetts State Senate Minority Leader Bruce Tarr (R-Gloucester) said the federal emergency measures “go down a very dangerous path.” Federal fisheries managers urged the New England Fishery Management Council (NEFMC) during the Council’s meeting in Rhode Island this week to adopt measures that closely resemble the federal emergency closures. On Wednesday, however, the Council rejected the motion brought forward by Bullard to close the areas closest to Gloucester, an action federal fisheries managers said was necessary to protect cod spawning grounds. Fishers and local politicians were not swayed by Bullard. “We’ve got to have a plan that offers people a way to stay alive in this industry,” said Tarr.

Losing these prime fishing areas certainly could have been an additional economic hardship pushing some of the inshore groundfishing fleet based in Gloucester entirely out of the fishery, but scientists and environmentalists worry that opening these areas in the interest of short-term economic gain could be devastating to the long-term viability of the stock.

The NEFC did vote to reduce the annual catch limit for Gulf of Maine cod by close to 75 percent (386 metric tons for all commercial and recreational fishermen) for the 2015 fishing season.

The Debate over the Science

While the stock assessment estimates are driving the emergency measures, some fishers are taking aim at the science behind the stock assessment. Not unlike the claims made by fishers in the Gulf of Mexico regarding red snapper stock, some Gulf of Maine fishers maintain they are catching so many cod in places that the science federal fisheries managers are using must be wrong. “We got proof,” Gloucester fisherman Joeseph Orlando told the Boston Globe, pointing to a fellow fisherman’s catch of 1,200 pounds of cod caught in about an hour and 15 minutes. “We can prove it. But yet they disregard that proof, you know. They’re God and jury, and that’s it. We’re nothing.”

In the Gulf of Mexico, fisheries managers contend the data show that while there are a lot of red snapper in the Gulf right now, too many of those fish have not reached reproductive age. Opening up the quotas now, just because fishers are seeing more fish than they have seen in a lifetime, is short-sighted and will not insure long-term sustainability of the stock. Similarly, New England fisheries managers point out that while there are some areas where cod are locally aggregating and plentiful, these local observations are not indicative of the overall population and don’t call the big picture data into question.

While some fishermen are keen to call the science into question, others accept it and are committed to adapting to the changing conditions in the fishery. While they acknowledge the hardships placed on the commercial fishing industry by the emergency measures, they are committed to both rebuilding cod stocks and looking for new ways to make fishing economically and environmentally sustainable. Maine Coast Fishermen’s Association (MCFA) Executive Director Ben Martens told the Boothbay Register, “Hopefully, this will help rebuild cod stocks. I know a lot of [fishermen] have tried to avoid cod and are going for other species to try and lengthen their seasons because of the low allocations.”

While it has seemed to provide little comfort to many commercial fishers, federal fisheries managers did have some good news. Following a recent Gulf of Maine haddock assessment, NMFS implemented an emergency action increasing Gulf of Maine haddock catch limits for the duration of fishing year 2014.