If you visited the Falmouth Service Center’s food pantry last week, you may have been offered a fillet of spiny dogfish (Squalus acanthias). Brenda Swain, the service center’s director, says they have “been working really hard on nutrition,” and she’s thrilled to have, for the first time, a fish fillet the food pantry can offer clients.

For more than a year now, dogfish has been held up as a potential savior of sorts in New England. The small shark species is plentiful in the Gulf of Maine right now, and as fisheries managers slash quota on iconic species like cod, the amount of dogfish commercial fishers can land keeps going up. There is little doubt that embattled local fishers would benefit tremendously from a reliable domestic market for dogfish. There is also little doubt that an inexpensive source of protein would benefit families in need—families who depend on the food pantry and other food assistance programs.

In the summer of 2013, the entire New England congressional delegation, led by U.S. Rep. William Keating (D-Mass), took up the cause and supported an initiative asking the USDA to make a surplus purchase of dogfish. Such a surplus purchase could put dogfish into federal food programs like National School Lunch, disaster relief, food banks, and other federal food assistance programs. In addition to providing affordable food, such a government purchase could absorb excess supply of dogfish and shore up prices. Win-Win-Win. Right?

A Questionable Choice for Women and Children 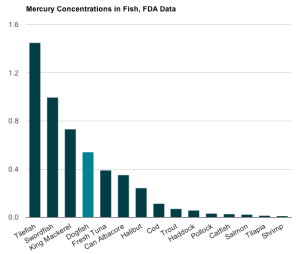 The trouble with all this—the one thing that politicians, environmental NGOs, fishing industry advocates, and now Swain at the Falmouth food pantry seem to consistently miss—is that the data show dogfish is high enough in mercury to make it a questionable choice for woman of reproductive age and young children. In fact, states like Maine, as well as the EPA and FDA in their joint advice regarding seafood, emphatically tell women not to eat any shark at all. In this light, funneling dogfish into food assistance programs as a healthy, inexpensive protein seems a flawed approach.

Personally I like dogfish. I think it has a place alongside swordfish and tuna at restaurants and at the fishmonger. As long as we continue to covet and pay top dollar for other readily available, high mercury species, dogfish should be promoted as a local, more sustainable choice. There are currently 23 times more dogfish in the Gulf of Maine than cod. Providing economic incentive for fishers to target dogfish instead of overfished stocks just makes sense. In addition to the socio-economic benefit of building dogfish markets, an overall reduction in dogfish in the Gulf of Maine might actually benefit the ecosystem and help species like cod recover.

So I’m all for promoting dogfish as a sustainable, local choice. I’m all for supporting local fishers, restaurants, community supported fisheries initiatives and organizations like the Gulf of Maine Research Institute that are working hard to introduce consumers to dogfish and other so-called “trash fish.” What I object to is doing so in a nutritional information vacuum (or worse, in a misinformation campaign). This is especially true when disadvantaged populations and high-risk groups are being offered dogfish as a heavily subsidized or even free product.

Potential consumers should be able to make an informed choice. They should know dogfish is a shark, and they should know what state and federal agencies advise regarding consuming sharks. I covered a study this past summer published in the journal Marine Environmental Research confirming previous health concerns associated with consuming dogfish. The study found mercury levels “exceeding the EPA action level for mercury in seafood” (0.30 ppm) in more than 50 percent of market-size samples of spiny dogfish. For the closely related smooth dogfish, the figure was 90 percent—a relevant statistic since sometimes different dogfish species are caught and sold generically as dogfish in areas where the species’ ranges overlap.

In an era where fisheries are changing based on global issues like climate change and local issues like overfishing, we need to be ever vigilant about sustainability. We must also remember, however, that the sustainable choice may not be the healthy choice for all people, and, most importantly, all people should have the ability to make an informed choice.