Non-native characins, like the pacu, have been introduced to every New England state except Rhode Island.

Over the past year, I’ve covered several stories about introductions of non-native, exotic fishes to U.S. waters. While most of my work on the topic has focused on non-native marine fish species in Florida, I thought it might be interesting, given that I live in Maine, to take a look at non-native fish introductions in New England. Maine is frequently criticized for having an overly protective approach to both the importation and possession of non-native fish species, and the topic often makes headlines in state and even national media. For example, local media is currently covering efforts to remove non-native Carassius auratus (goldfish) from a pond in Belfast, Maine, and a high profile, protracted dispute between a resident of Harpswell, Maine and the Department of Inland Fisheries and Wildlife over pond-kept Cyprinus spp (koi) received national attention when it ended in the exotic fish being confiscated and, ultimately, euthanized by the State. 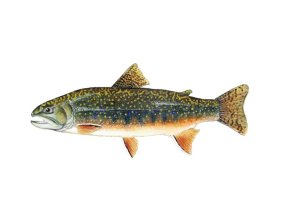 Brook trout are important New England natives that have been been negatively affected by non-native species. (Artwork: http://www.KarenTalbotArt.com)

What is the actual risk associated with the introduction of non-native species? What do we really know about the species that have been introduced? Have extant regulations been effective? Are current laws too restrictive? Not restrictive enough? Over the course of the next few weeks, I’m going to dedicate some time to educating myself on the issue of non-native fishes in New England. I’ll share much of what I learn here at The Good Catch Blog. If you have thoughts or questions, I hope you’ll reach out either in the comments at the end of a blog post or via email or The Good Catch Facebook page.

For the purposes of this series, I’ve defined New England as Maine, New Hampshire, Vermont, Massachusetts, Rhode Island and Connecticut. The southern tip of Connecticut (the southern most state in New England) is at a latitude of roughly 41°, and the northern tip of Maine, New England’s northern most state is 47° 28’N. I point this out because it’s important to remember the climate of New England is a limiting factor for non-native fishes introduced to the region from sub-tropical and tropical climates.

In terms of data, I’m relying heavily on the United States Geological Survey‘s (USGS) Non-indigenous Aquatic Species (NAS) database for this discussion. It’s important to keep in mind that not all introductions have led to established populations, and in some cases, a species is believed to be completely eradicated after a documented introduction (e.g., Piaractus brachypomus in Maine). For the purpose of this post, I am defining “non-native introduction,” as the USDA database does, as the introduction of an exotic species. By exotic, I mean not native to the United States. There are also so-called “native transplants” (e.g., Micropterus dolomieu and M. salmoides in Maine) that are important in terms of their effects on native fishes and ecosystems, but I’ll address those in a later post.

Within New England, the NAS database shows Massachusetts has the highest number of non-native, exotic fish (marine and freshwater) species introductions and Rhode Island has the least.

According to the data, the number of non-native, exotic fish introductions does not correlate to how much aquatic habitat a state has. For the six New England states, Maine has by far the most aquatic habitat (11,750 square kilometers), but it has half the number of documented non-native species introductions as Massachusetts, the state with the next largest water areas (7,134 square kilometers).

Within the six New England states, the USGS NAS database lists approximately 30 species of non-native fishes from 11 families. Several of the listings are only identified to the genus level and may represent some duplicates. There are also several hybrid species listed.

Perhaps not surprising, the most common family of non-native fishes represented in New England is the family Cyprinidae, commonly know as minnows or carp. This family includes both Carassius auratus (common goldfish) and Cyprinus carpio (common carp), which have both been introduced to every New England state. Ctenopharyngodon idella (grass carp) have been reported in Massachusetts, New Hampshire and Connecticut.

Many trout and salmon from the family Salmonidae are native to New England, but Salmo trutta (brown trout) is a non-native, exotic species that has been introduced to all six New England states. In addition, Salvelinus alpinus (arctic char) have been introduced to New Hampshire and Connecticut, and two hybrids–Salmo x Salvelinus trutta x fontinalis (tiger trout) and Salmo salar x trutta (sambrown)–have been reported in New Hampshire and Connecticut respectively. Two other species from the Family Salmonidae are reported to have been introduced to Maine: Coregonus wartmanni (blaufelchen) and Coregonus albula (vendace).

Next I’ll take a look at so-called native transplants. These are fishes native to the United States that are not native to New England but have been introduced to the region. I’ll also share some of what I have learned regarding pathways for introduction. Ultimately, I hope to take a look at risk factors and regulations. Stay tuned…