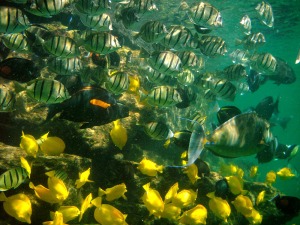 In case you missed it over the weekend, my article regarding the data behind Hawaii’s aquarium fishery published online at Reef to Rainforest, and an amended version will appear in print in the next CORAL Magazine. For those readers unfamiliar with my work reporting on aquarium fisheries, I have come to see aquarium fisheries as a microcosm for fisheries in general. Because the fisheries are much smaller, the catch is far less and the consumer base is only a micro-percent of seafood’s consumer base, the aquarium fishery issues, despite a profound lack of data, are often easier to analyze. If the Hawaii aquarium fishery is shut down by legislative efforts unsubstantiated by the best available science, aquarists should worry about the health of the trade and hobby globally. In the bigger picture, all stakeholders should be concerned when an emotionally-driven political agenda of a few hijacks a far larger and more important discussion about fishery sustainability and the overall health of coral reefs in the face of an honest analysis of the threats.

For decades now, the harvest of Hawaiian reef fishes for the global aquarium trade has fueled a heated, emotional debate, with aquarium fishers and those who work in the trade on one side and anti-aquarium fishery activists on the other.

Despite an effective, multi-stakeholder approach to fisheries management in Hawaii—despite data that consistently show sustainability—these activists unfailingly succeed in having bills introduced to the Hawaii State Legislature each year that would close the aquarium fishery. This year is no different with seven aquarium fishery-related bills before the Legislature.

Hawaii: A Source of Premium Fishes

The loss of the marine aquarium fishery in Hawaii would be a blow to the aquarium trade and hobby in the U.S. and abroad. The aquarium fishes harvested in Hawaii reach the mainland by one of the shortest supply chains available to North American aquarists. As a result, Hawaiian fishes are consistently healthy with extremely low mortalities. Because Hawaiian fishes are harvested in a well-managed fishery with copious data supporting fishery sustainability, they represent one of the best choices for environmentally aware aquarium keepers.

While health and sustainability are paramount for some aquarists, others note that losing Hawaii would mean that several Hawaiian endemic species would likely disappear from the hobby. Examples include several dwarf angelfishes, a number of butterflyfishes, and an array of popular wrasse species.

Not everyone agrees the aquarium fishery in Hawaii is well managed and sustainable. In fact, some of its most influential critics argue it’s not even a fishery at all. Individuals like Maui-based Robert Wintner (aka “Snorkel Bob”) believe the aquarium trade is unethical and that no reef fishes should be harvested for aquaria. He contends that aquarium fishermen are responsible for “devastating” changes on beautiful Hawaiian reef areas.

Other anti-aquarium activist like Rene Umberger, also from Maui, are open to the idea of an aquarium hobby based solely on aquacultured fishes. Either way, both Umberger and Wintner, and the activist groups they represent, have demonstrated a dogged commitment to closing the State’s most valuable inshore fishery through legislation.

The repeated attacks on the aquarium fishery fly in the face of the data and are no doubt frustrating to fishers and aquarium fishery advocates. It’s important to remember, however, that the system has time and again proven it works. Each year anti-aquarium fishery bills come up, and each year they fail to become law. In many cases they fail to even be heard or make it out of committee. In large part this is because individuals take the time to make sure the science and the data are seen and heard.

Local stakeholders and scientists annually go to the Legislature and present oral comment. Others take the time to submit electronic testimony. Groups like the Pet Industry Joint Advisory Council (PIJAC) in Washington bring their resources to bear on proposed legislation that threatens to limit or close the fishery. Because of all these efforts, the data usually prevail, but that will only remain the case if individuals are informed.

So how do this year’s seven aquarium-fishery related bills stack up against the data? Have Hawaii’s reefs been devastated by the aquarium fishery as some critics contend? Are fish populations being wiped out by over-collection? Are animals harvested for the aquarium trade subjected to cruel treatment? Or, as others argue—does Hawaii stand as an example of one of the best-studied, best-managed aquarium fisheries anywhere in the world?

To answer these questions, we turn to the fisheries managers on the ground and, of course, to the data accumulated by… [Read More]

Ret Talbot is a freelance writer who covers fisheries at the intersection of science and sustainability. His work has appeared in publications such as National Geographic, Mongabay, Discover Magazine, Ocean Geographic and Coral Magazine. He lives on the coast of Maine with his wife, scientific illustrator Karen Talbot.
View all posts by Ret Talbot →
This entry was posted in Hawaii, Legislation, Ornamental Fisheries, Uncategorized and tagged anti-fishery legislation, ban bills, hawaii aquarium fishery. Bookmark the permalink.