The U.S. Department of Commerce has set a goal of a fivefold increase in U.S. aquaculture production value, to $5 billion by 2025. [Source: Kampachi Farms]

Each year I walk away from the Seafood Expo North America (SENA15) with a personal take-home point—something that, in addition to influencing my professional career as a writer, I can adopt in my personal life as a consumer. As I wrote on Monday, this year’s Expo inspired me to focus more on finfish aquaculture in both my writing and in my personal purchasing decisions over the coming year. After several panel discussions, private conversations and interviews with SENA15 speakers and vendors, I believe more firmly than ever that the future of a truly sustainable seafood industry must include far more aquaculture effort supplementing well-managed fisheries. While I know many people agree with me based on the conversations I had at SENA15, I also heard loud and clear from some of my readers that there remain significant concerns about farmed fish.

Defying Conventional Wisdom – Great Synergies to be Had

Much of the work I do as a journalist covering fisheries at the intersection of science and sustainability focuses on wild fisheries. In particular, I focus on how sustainable fisheries can create economic incentive to conserve and can provide valuable income for working waterfronts. When fishers stay connected to the resource, we can gain so much in terms of both environmental and socio-economic benefit. Given that this is the space from which I often write, I understand why some of my readers may feel alarmed that I’m, as one reader wrote, “jumping on the fish faming bandwagon.”

I understand it, but I don’t agree. 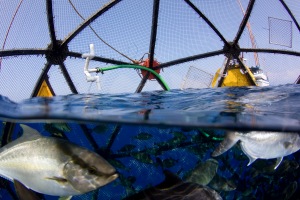 Neither does Neil Sims, co-founder and CEO of Hawaii-based Kampachi Farms, and he said as much during a panel at SENA15 titled “2 Billion People are Coming to Dinner, Let’s Feed them Fish!” During his presentation, Sims described his company’s trial of an unanchored, free-drifting fish culture system. While Sims believes open-ocean mariculture is the “only one real solution” for producing farmed fish on the scale required by increasing global demand, and while he is an unapologetic aquaculture evangelist, he doesn’t see fish farming as necessarily competing with wild-harvest. In fact, he believes the two can be complimentary, especially in offshore Federal waters, where there is currently no commercial aquaculture effort (that’s right, zero, but I’ll cover that in a separate post).

To prove his point regarding aquaculture and wild harvest co-existing, Sims described the response from some local fishers when Kampachi pulled the open ocean net pen at the end of the trial. He said, “We had fishermen grabbing us by the metaphorical lapels in the harbor saying ‘Please don’t pull that net pen out—that’s the best fishing I’ve ever had in my life.’”

According to Sims, the net pen, which was free-drifting with ocean currents in waters two to three miles deep, became a great fish aggregating device. “There were tuna, there were marlin, there were mahi mahi,” he said. “This, I think, defies the conventional wisdom that fishing and aquaculture are incompatible. There are some great synergies to be had here.” 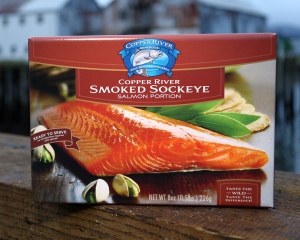 Another major concern commonly expressed in wild harvest fisheries about farmed fish is that aquaculture will expand supply of certain species and thereby drive all prices down. Wild salmon fisheries in Alaska are a good case study. As salmon farming became a leading segment of the global aquaculture industry, many salmon fishers and communities dependent upon commercial salmon fishing expressed concern that the price of wild salmon would plummet. In short, farmed salmon, they feared, would create economic pressures in the marketplace, as it competed directly with wild salmon.

While there have certainly been struggles along the way, today, we see these fears are mitigated by the fact that an overall increase in salmon supply means there is a much larger and diverse market for all salmon products worldwide. This much larger marketplace has created new opportunities for wild salmon fisheries, where a product such as wild Copper River salmon or wild Bristol Bay salmon has seen its value increase because of its own attributes. We’ve seen that in a diverse global marketplace attained largely through increase supply of farmed salmon, the two products—wild and farmed salmon—do not need to directly compete with one another as the primary mechanism for determining value. They are different products for different market segments that both can achieve a fair market value based on their own attributes.

In addition to farmed fish helping build larger, more diverse seafood markets, thereby creating new opportunities for wild fisheries, aquaculture can play a complimentary role to working waterfronts suffering from decreasing quotas in wild fisheries. In New England, for example, many fishing communities are struggling under dramatically cut quotas on iconic species like cod. Aquaculture provides an opportunity for some of these communities to diversify and create new revenue streams. Maine is leading the way in this regard, and I’m looking very much forward to covering some of these stories in the near future.

The Data are Clear

So to those readers accusing me of climbing on the farmed fish bandwagon, I say this: Aquaculture is not at odds with wild fisheries. It is not an us-versus-them paradigm. The data are clear—they show we should eat more seafood, but they also show that the sustainable supply of wild-caught fishes is insufficient to meet growing global demand. Farming fish makes sense, when farming adheres to best management practices. It makes sense for our health, for the health of the ocean and for the health of Earth as a whole. Farming fish makes sense, but it is not to the exclusion of robust, sustainable wild fisheries. As Sims has suggested and various case studies have shown, the two can co-exist and even compliment one another, and we need to advocate for better management in both.