What about the ‘S’ Word? – Seafood Sustainability Today

If you’ve been following my coverage of this year’s Seafood Expo North America (SENA15), you know I found it noteworthy how many times I heard speakers presenting in the “Seafood Sustainability” conference track speaking about the word “sustainable” in a less than enthusiastic manner. For example, I heard people well-respected for their leadership on seafood sustainability issues say things like: “I don’t really like the ‘s’ word,” “Sustainability is trying to do too much in one word,” “Sustainability is a tough word,” and “Sustainability is the most hackneyed word in our vocabulary.” To be clear, it’s generally not the concept of sustainability from which I heard these thought leaders distancing themselves so much as it’s the current usage and the way that current usage plays out on a place like the SENA15 exhibit hall floor.

As Andrew Homan, a lawyer and co-author of the paper “Greenwashing & Self-Declared Seafood Eco-Labels” (Tulane Environmental Law Journal, 2014) put it during a SENA15 panel presentation titled “Legally green: Environmental claims in the marketplace,” “Anyone can claim anything they want–it’s kind of the Wild West in the US.”

“Sustainable” – The Data behind Its Usage

It’s perhaps worth remembering that this proliferation of sustainability talk is a relatively recent phenomenon not just in the seafood industry, but everywhere. It is generally agreed that the word sustainable did not possess its current meaning (i.e., “capable of being continued at a certain level”) in common usage until the mid 1960s. The Google Books Ngram Viewer tool, which searches words and phrases found in Google books, gives us a nice visual representation of how sustainability has gained popularity from the 1970s to today.

Frequency of the use of the words “sustainable” and “sustainability” in US English text as a percentage of all words. [Source: Google Ngram]

By the middle of the first decade of this century–just about a decade ago–“sustainable” had achieved buzzword status, crossing over to popular media. According to the Bookworm: Movies tool, which searches nearly 90,000 movies and TV shows, even movie-goers may have observed the trend with the usage of the word “sustainable” peaking in onscreen language in 2008 .

It’s not surprising (at all) that the trend can also be seen in the media. In 2005, for example, the word “sustainable” appeared in 321 New York Times articles according to the Times’ word usage frequency tool Chronicle. By 2009, however, “sustainable” was found in 1247 articles, and in 2011, the word sustainable appeared in a record-breaking 1254 articles.

Using the New York Times word frequency tool, one sees that usage of the word sustainable peaked in 2008, when it appeared in 1254 articles. [Source: NYTlabs Chronicle]

Around the same time–late 2011 into 2012–some academics and those in the NGO community began to question seriously whether the word sustainable was becoming irrelevant based on its sheer frequency of usage. The sentiment was perhaps best summed up by Randall Munroe’s early 2012 comic titled “The Word ‘Sustainable’ is Unsustainable.”

XKCD’s Take on Sustainable – Will all sentences be just the word “sustainable” repeated over and over by 2109? [Source: XKCD]

Some worried the word was at the heart of a plethora of greenwashing campaigns, where companies were using “sustainable” primarily from a marketing perspective to appeal to customers without actually defining what it meant. For those who did define what it meant, there were sometimes questions about verifying those claims.

Specific to the seafood industry, major players like Wal-Mart began to engage relatively early by tying their claims to third-party certification. In 2006, for example, Wal-Mart announced its goal was to carry 100 percent MSC-certified wild-caught fishes in its stores within five years. By the time 2011 rolled around, however, people were already beginning to question sustainability claims, wondering, as Munroe did, if the word had lost its meaning.

Ironically, this miasma of doubt surrounding sustainability was descending just as the seafood industry as a whole was finally coming up to speed with a largely uncoordinated but thoroughly pervasive sustainability campaign. Sustainable seafood was becoming a hot topic in supermarkets and the news media. In 2005, only two articles in the NYT used the phrase “sustainable seafood,” but by 2011, the number of articles containing the phrase had jumped to 39.

Today, it seems just about every seafood company is making a claim about sustainability (just walk the SENA15 floor). While some are grounding those claims in third-party certification schemes, others continue to simply use the term as a sort of private eco-label–a self declaration of sustainability that may mean a lot or nothing at all. The net effect is that you can have two companies calling two very different products “sustainable.” To return to what Homan said at SENA15, we had arrived at a place where “anyone can claim anything they want.”

A 2013 survey of 3,000 Americans, conducted on behalf of NPR by Truven Health Analytics, found that most Americans said “sustainably caught” seafood was important to them.

Part of what is driving seafood companies to use the term sustainable is the fact that “sustainable” is a word that appeared to have some cache with the consumer. The data are all over the place, but when it comes to showing consumer demand for sustainable seafood, a widely publicized 2013 study found that a majority of Americans said that “sustainably caught” seafood was important to them (more than half also said they would not pay more for it).

The world’s largest and most recognized sustainable seafood certification is issued by the Marine Stewardship Council (MSC), and the number of fisheries certified by MSC has, not surprisingly, risen dramatically during the time period we’ve been discussing. As of 2013, the number of MSC certified fisheries had increased by over 420% in just five years according to Biodiversity Indicators Partnership. At that time, it was estimated that MSC certified fisheries represented just under 10% of wild-harvest worldwide.

Businesses seek third-party certification for a variety of reasons. For many, it is a way to differentiate a particular fishery or business, and while it can be an expensive process, I’ve interviewed plenty of people who have told me the cost is worth it in order to gain a competitive advantage. Others see certification as a way to mitigate bad press or sustainability concerns about certain practices within a fishery–a sort of damage control strategy. For example, there are well-publicized environmental concerns regarding bottom trawls, but MSC certifies select bottom trawl fisheries, explaining:

All fishing methods have an impact on the marine environment but fisheries that have been certified to the MSC standard for sustainable fishing must demonstrate that their impact is minimal and they are well managed. For example, bottom trawling is often cited as an example of a damaging fishing method, but bottom-trawl fisheries are not excluded from the MSC program. Instead, the MSC certification program is open to all fisheries that are sustainable, well managed and have effective controls and enforcement.

Because many of the most trusted consumer-facing tools like Monterey Bay Aquarium’s Seafood Watch Guide, automatically align with MSC certified fisheries, a worthwhile dialog about becoming more sustainable can be effectively silenced by a fishery using the word “sustainable” like a binary on-off switch.

The Trouble with Sustainability as an Endpoint

When major Seafood industry players like High Liner Foods or Wal-Mart claim greater than 90% sustainability, we begin to really see how the word sustainability is becoming unsustainable. This is not to say that these companies have not made commendable progress along their respective journeys toward sustainability, but to claim that they have all but achieved their goals is problematic on several fronts.

First, both of the aforementioned companies are basing their claims largely on internal goals of sourcing the vast majority (if not 100%) of their wild-harvested seafood from MSC certified fisheries. That is no doubt an admirable goal, but given that only 20% of wild fisheries worldwide even have a realistic shot at being certified (because they are the only ones that possess the requisite money, organization and data), we must understand that such claims marginalize the vast majority of fisheries. Millions of people depend on these marginalized fisheries, and they have very real incentive (e.g., feeding their families) to sell their product somewhere.

Is aiming for sourcing 100% of seafood from MSC certified fisheries really making global fisheries more sustainable, or is it just pushing the problem further out of sight? As New England Aquarium Director of Research Michael Tlusty said during a panel presentation on the changing landscape of sustainability at SENA15, “Just cherry-picking off the best is going to make your company look good, but for the entire food system, it’s actually going to do it a disservice.”

Not All Sustainability Claims are Created Equal 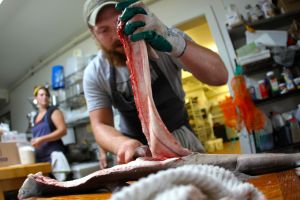 I’ll conclude with a thought exercise, that I think gets to the heart of the issue regarding the use of the word “sustainable.” Imagine two consumer-facing businesses selling seafood. One is a small restaurant with a chef who is committed to sustainably-sourced, local seafood. This chef has developed relationships with individual fishers in his community–he’s shaken their hands, been out on their boats and trusts them. Purchasing from these fishers puts money back into local working waterfronts and connects diners to their community and local resource. A “catch of the day” approach promotes seasonal selections and relies on natural abundance. This model is consistent with many people’s definition of sustainable, even if none of the seafood served is “certified sustainable.”

The other business is a big box retailer that deals in such large volume that is has little choice but to rely on third-party certification schemes to meet its own internal sustainability goals. A very high percentage of the seafood sold by this retailer is indeed “certified sustainable” by a third-party certification scheme. Much of it, however, is sourced from fisheries half a world away, requiring a much larger carbon footprint to bring those products to market. Still, the seafood is “certified sustainable,” and this model also fits with many people’s definition of sustainable.

“It’s really easy to try to focus in on the word sustainable as a buzzword and a catch-all, but in reality, you’re almost doing yourself a disservice because you’re trying to do too much in one word,”said Tania Taranovski, Director of the Sustainable Seafood Program at the New England Aquarium during a SENA15 panel discussion. “Instead of making it simple it actually in some ways makes it more complicated. One of the things we need to do is to be really clear about what it is–where are the gains that we’re making–and tell those stories because those are the things that are really impactful, they carry meaning, they make people care about the progress, they inspire people to learn more.”

The bottom line here for me is that we’ve come a long way. Fifty years ago we weren’t even using the word “sustainable,” and now its nearly ubiquitous. As the context surrounding the seafood sustainability discussion changes, we must challenge ourselves to change our goals and aspirations with it. We must also challenge each other and continually reset the bar. We’ve come a long way, but there are still many challenges and many opportunities on the horizon. This is one reason I so enjoy attending the Seafood Expo North America and other events where industry, NGOs and academics can interact. As long as we’re having the discussion, the future looks bright.

Ret Talbot is a freelance writer who covers fisheries at the intersection of science and sustainability. His work has appeared in publications such as National Geographic, Mongabay, Discover Magazine, Ocean Geographic and Coral Magazine. He lives on the coast of Maine with his wife, scientific illustrator Karen Talbot.
View all posts by Ret Talbot →
This entry was posted in Ecolabels, Marine Stewardship Council and tagged certification, definition of sustainable, Marine Stewardship Council, Seafood Expo North America, SENA15, sustainability, sustainability trends, sustainable seafood, third party certification. Bookmark the permalink.