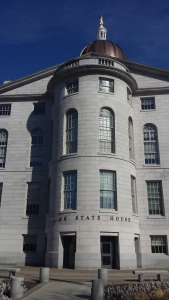 Many of Maine’s scallopers were in Augusta today instead of on the water harvesting scallops on one of the last days of the season.

A bill introduced into the Maine Legislature that would have changed the way the State’s scallop fishery is managed was unanimously voted down in committee today. The standing room only crowd at today’s public hearing expressed strong opposition to LD 908, “An Act To Promote Sustainability in the Scallop Fishing Industry.” If passed into law as written, the Bill would have reduced the size of scallop dragging gear, decreased the daily limit and loosened up eligibility requirements for obtaining a license in the limited entry fishery. I wrote about the Bill itself yesterday, and I’ll be covering the hearing in full tomorrow. In the interim, feel free to have a look at my Twitter feed from today to get a sense of what transpired.

As I drove home today from Augusta, I was thinking of all the legislative public hearings I’ve attended over the years regarding fisheries issues. It strikes me that rarely does a top-down legislative approach to fisheries management succeed unless a fishery is being terribly mismanaged or the legislation itself is truly Big Picture (e.g.,Magnuson–Stevens) and informed by a true multistakeholder process. LD 908 no doubt has its origins in real issues within the fishery that need to be addressed, but, as one testifier stated today, the legislature is the “wrong venue” to address those issues when fisheries managers are already engaged.

Maine’s Department of Marine Resources (DMR) has generally done good work with rebuilding the scallop fishery over the past seven or eight years. By nearly any metric, the fishery is rebounding. While issues persist (limited entry eligibility requirements being the biggest in my opinion), the need for a legislative “Act To Promote Sustainability in the Scallop Fishing Industry” given the ongoing management work seems questionable at best. Perhaps it’s true that the Bill’s sponsor was just responding to concerns expressed by his constituents, but a legislator drafting legislation that comes off as ignorant of the fishery and its current management wastes everyone’s time and resources.

As I sat in the public hearing today surrounded by scallopers, I couldn’t help but take note of the sun streaming in the windows. Today was one of the last days in this year’s scallop fishing season, and yet a sizable percentage of the fleet was packed into a conference room more than 40 miles from the ocean to oppose a piece of legislation that even the State’s own fisheries managers strongly opposed. That just seems wrong.

Ret Talbot is a freelance writer who covers fisheries at the intersection of science and sustainability. His work has appeared in publications such as National Geographic, Mongabay, Discover Magazine, Ocean Geographic and Coral Magazine. He lives on the coast of Maine with his wife, scientific illustrator Karen Talbot.
View all posts by Ret Talbot →
This entry was posted in Legislation, Maine Fisheries, Northeast Fisheries and tagged fishery, LD 908, maine scallops. Bookmark the permalink.