The European Union withdrew its proposal near the end of the day today to include the Banggai cardinalfish (Pterapogon kauderni) on Appendix II of the Convention on International Trade in Endangered Species of Wild Fauna and Flora (CITES). The withdrawal came after Indonesia opposed the proposal during the 17th meeting of the Conference of the Parties (CoP17) to CITES. 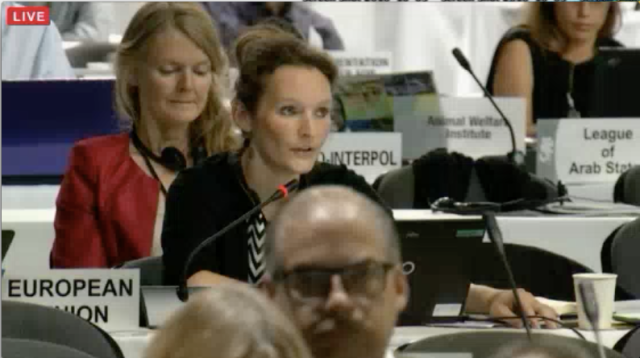 The EU representative offered to withdraw the EU’s proposal to  include the Banggai cardinalfish under CITES Appendix II at CoP17 after Indonesia opposed the proposal.

The EU offered to withdraw its proposal upon the agreement of so-called draft decisions. “Should these decisions be adopted by CoP17,” said the EU’s representative, “we would be ready to consider withdrawing our proposal to include the species in Appendix II.”

The draft decisions are as follows:

Indonesia adopted the EU’s draft decisions and committed to reporting the progress of conservation and management measures to insure the sustainability of the species.

Indonesia responded to the EU’s draft decisions by saying, “Indonesia will adopt the draft decision proposed by EU and will report the progress to the 30th Animal Committee meeting.”

“With the agreement of Indonesia as the only range state for this species,” stated the Committee Chair, “I am assuming that we will have a consensus agreement of these draft decisions.” The Chair then asked for opposition to which Brazil responded with the following:

We will not block the consensus on this but we’re uncomfortable of having decision introduced at 7:30 [pm]. I think this information–the communication–can be a bit improved. If Indonesia is happy with this decision we will be happy to go with it, but we would prefer that this information be made available to parties ahead of time so we can examine them.

Conceding that the “procedure is not ideal,” the Chair nonetheless continued, saying “obviously we get to the agenda items when we can, and we had a very full agenda–again we still have a number of items to get through.”

With 11 proposals still on the agenda, and the meeting having already run two and one-half hours over, there was palpable frustration amongst some Parties and observers consistent with that which Brazil had expressed.

Stay tuned to the Good Catch Blog for a more detailed analysis of the withdrawal of the Banggai cardinalfish proposal and what it means for the species and the trade in marine aquarium fishes.

Ret Talbot is a freelance writer who covers fisheries at the intersection of science and sustainability. His work has appeared in publications such as National Geographic, Mongabay, Discover Magazine, Ocean Geographic and Coral Magazine. He lives on the coast of Maine with his wife, scientific illustrator Karen Talbot.
View all posts by Ret Talbot →
This entry was posted in CITES, Endangered Species Act (ESA), Indo-Pacific and tagged Appendix II, Banggai Cardinalfish, CITES, Pterapogon kauderni. Bookmark the permalink.