The Pet Industry Joint Advisory Council (PIJAC) condemns the recent airing of Discovery’s Eaten Alive special in which an activist attempted to goad a giant anaconda into swallowing him.

The highly controversial show aired Sunday and featured so-called “snake researcher and conservationist” Paul Rosolie. According to Discovery, “Rosolio has dedicated his career to studying the giant green anaconda.” Despite their lead man being a so-called/self-proclaimed conservationist, Discovery Channel’s efforts to frame “Eaten Alive” as being about conservation fell flat on many who are actually engaged in rainforest conservation. Nonetheless Rosolio was emphatic:

I’ve seen first-hand how the Amazon Rainforest is being destroyed. It is so rampant that we may be the last generation with the opportunity to save it. People need to wake up to what is going on. What better way is there to shock people than to put my life on the line with the largest snake on the planet, the green anaconda?

I’m going to assume that question is rhetorical, as I could spend the rest of this blog entry detailing better ways promote rainforest conservation. Those who grew up on National Geographic wildlife specials and early Discovery Channel programming have expressed confusion, then dismay and now anger as the programming on the Discovery Channel (and its affiliate channels like Animal Planet) has gone from education to entertainment to a “shock and awe” approach not unlike the aquarist who keeps a predator tank just so he or she can impress friends with “ferocious” pets. 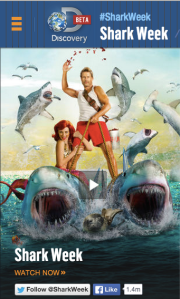 I’m not really surprised any longer when I see something appalling or laughable on Discovery. Having said that, “Eaten Alive” shocked me. It’s hard to imagine how the executives at Discovery would air “Eaten Alive” on the heels of such dismal reviews of the perennial Shark Week, which critics accurately decreed this year as “a travesty,” “B-movie-style blend of fiction, bad acting, a few facts and potential injuries to sharks,” and “a gee-whiz, science-ish reality show.”

…or is it so hard to believe? In its 27th season, Shark Week lured in 42 million viewers this past August. According to industry ratings, it did exceptionally well with younger-aged men and women. I suspect that despite my Facebook feed being filled with outrage over “Eaten Alive,” the ratings will reinforce Discovery’s trajectory and we’ll see more like “Eaten Alive” and “Shark Week” in the future.

During the program, Paul Rosolie and his team repeatedly provoked the anaconda in a lengthy effort to get it to engage. Any responsible reptile keeper could have told them that constrictors don’t swallow prey for fun or sport, they do it for nourishment. As an organization, one of PIJAC’s main tenets is to promote responsible pet ownership, including snakes. We therefore denounce the Discovery channel’s mistreatment of animals for the purpose of ratings as irresponsible, exploitative and insulting to those who raise and care for constrictors.

What Else Can PIJAC Do?

In fact, it would make me happier if PIJAC President and CEO Ed Sayres would start dealing in the realities of the aquarium trade and hobby across the board rather than relying on hyperbole and misinformation.

Three week ago, I called out Sayres on his own blog post about the marine aquarium hobby and the misinformation on PIJAC’s landing page for aquarium issues. I’m glad PIJAC took the time to respond to “Eaten Alive,” but what about PIJAC’s continued dissemination of misinformation about the aquarium trade? As of today, Sayres blog entry remains unchanged, as does the PIJAC landing page for aquarium issues. Both include misinformation about multiple aquarium trade issues. That misinformation continues to be disseminated in ever-widening circles with increasingly inaccurate statements such as the seriously misguided one issued last week by Ecoxotic in their own blog entry penned by principal Ike Eigenbrode.

[UPDATE: The Ecoxotic blog entry was actually written in early September, not in early December as I reported. The Ecoxotic blog entry itself is still problematic, given the misinformation that continues to be disseminated with PIJAC as the source. If PIJAC would address the fundamental issue, and they have assured me they are doing so, then we would have far less misinformation disseminated in other places (e.g., Ecoxotic’s blog, MASNA’s blog, etc.). (10 December 2014 @15.00hrs est)]

Sayer’s and, in turn, PIJAC’s use of misinformation to polarize the debate over the aquarium trade is, in some ways, not unlike Shark Week and “Eaten Alive.” It seems a good old, fact-based documentary about sharks’ or snakes’ natural history just doesn’t cut it any longer, and I suspect Sayres worried detailing the actual facts about aquarium animals and the Endangered Species Act (ESA) was not nearly as sexy as speaking in half-truths and misinformation (if you want the specifics on said half-truths and misinformation, I detail some of it here). Then again, perhaps Sayres didn’t know he was spreading misinformation, as he is new to the aquarium trade and could have been taking his lead (and “facts”) from PIJAC’s website just as so many others have done. To me, it doesn’t matter so much where he got his information–what matters to me is that PIJAC should fix it, especially since they have now acknowledged the inaccuracy of the information and the importance of “getting it right” in off-the-record discussions.

PIJAC says it holds as one of its main tenets “responsible pet ownership.” I would think such an organization would want aquarists to have the facts about the plight of various aquarium animals in the wild. I imagine they would embrace a data-based approach to protecting those animals, even if it meant that some animals may no longer be available to aquarists.

As I have stated in the past, I have a great deal of confidence in several members of PIJAC’s Aquatic Committee. I know from covering some of these people and their actions over the past several years that they are indeed on the leading edge of creating a truly sustainable aquarium trade that is a positive force for conservation. When these individuals speak out either as individuals or as a committee, we hear a hopeful, positive message that acknowledges the complexity of these issues. We hear a commitment to “getting this right” and balancing, as a lobbying organization is charged with doing, the threats to the trade with the larger threats to the animals on which the trade depends. I hope we hear more from the committee members in the coming days, and I look forward to covering it when we do.