Sustainability Is Not a Club 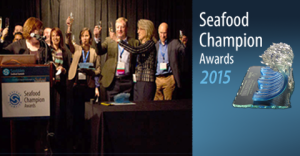 Seafood Champion finalists and winners raised their glasses as the audience toasted their achievements at a packed reception on the opening night of the Seafood Summit on February 9, 2015. [Source: http://www.seaweb.org]

It’s easy to see why those companies “certified as sustainable” may be viewed as the elite. It’s estimated that only around 10 percent of global wild caught seafood comes from fisheries engaged with the largest, most well-recognized certification scheme—the Marine Stewardship Council (MSC).

“If you look at MSC certifications,” said World Wildlife Fund (WWF) Vice President for Fisheries Conservation Dr. Bill Fox during a panel discussion at the Seafood Expo North America (SENA15), “the likelihood is that it’s going to deal with fairly large commercial fisheries in international trade where there are stock assessments.” As Fox pointed out, that’s only about 20-percent of the global supply of wild fishes that have a realistic shot at an MSC certification at present. What about the other 80 percent? And what about global aquaculture, where sustainability questions persist globally despite a preponderance of science showing that sustainable aquaculture is not only possible, but it is essential to the future of the seafood industry?

When sustainability is viewed as an endpoint—a door through which one passes into the clubhouse—then the seafood industry potentially does itself a great disservice. Giving elevated status to the few at the top often means the majority will never make it inside. This is why the most forward-thinking companies furthest along the path to sustainability may choose not to enter the clubhouse at all. “Claiming 98 or 99 percent sustainability is about ego,” said New England Aquarium’s Director of Research Michael Tlusty Sunday during a SENA15 panel titled “The Changing Landscape of Sustainable Seafood.” “If you start making too much progress,” Tlusty said, “you need to set a more rigorous.”

This isn’t to say that we shouldn’t have certification, verification and assurance schemes in the seafood industry. In fact, such programs are essential to moving the dial in the right direction. It is, in large part, thanks to such programs that we are where we are today—that we’re even having this discussion. Consumer-facing certifications have elevated the dialog in the public sphere (although we still have a lot of work to do in this regard), and internal certifications have helped business-to-business interactions. The important thing to remember, however, is that when you deal exclusively with the tiny percentage of the industry that is certified sustainable, you potentially further marginalize the vast majority.

In Sunday’s panel discussion, Tlusty talked about how we use certification to help move the industry along the path toward greater sustainability without alienating the majority of seafood businesses that have not received the gold star. “We are a global sourcing food system,” Tlusty said. “If you say we’re going to cherry-pick all the best producers…there’s likely to be a lot of egregious occurrences happening and that product is just going to be shifted elsewhere.” Instead, Tlusty suggested, we need to stay engaged with the entire industry. “Just cherry-picking off the best is going to make your company look good,” he said, “but for the entire food system, it’s actually going to do it a disservice.”

The leaders of the seafood industry need to avoid wearing sustainability blinders. Yes, we need to shine a light on those who are doing it well insofar as sustainability is concerned, but, more importantly, we must not allow those in our periphery vision to fall out of focus. Reward those who have worked hard to achieve certification, but also engage with those who have not. Certification is a tool; use it as such.

I made the observation on Twitter yesterday that as the word sustainability proliferates on the exhibit floor at SENA15, the Sustainable Fisheries conference track occurring concurrent with the show seems to be distancing itself somewhat from the word. How many times did I hear in panel discussions this year something like, “I don’t really like the ‘S’ word”?

I think we’re seeing an evolution here that goes beyond vocabulary. I think perhaps we’re coming to appreciate that sustainability is nothing more or nothing less than a best practice.

That is something I think we all should celebrate.

1 Response to Sustainability Is Not a Club